Candy fretted about the weather for weeks leading up to our cruise to Alaska .  Friends kept telling her September was the wrong time of the year to go.  The weather would be horrible and we would be freezing.  Her iPhone weather-app didn’t help much either.  It forecast rain for the entire week of our trip.  Luckily, our friends and her phone turned out to be wrong, eventually.

The first leg of our trip was a little worrisome.  The only thing we could see was a fog and  mist-shrouded coast for much of the first full day of cruising. To add to the festivities, the Captain advised there was weather heading our way and he was steaming full speed ahead to find some shelter.

The weather hit about 4:00 the next morning. Boy, am I glad he found some sheltered water.  A ship with 2,000 plus passengers should be too large to rock like a dinghy in the wake a yacht.  I could only imagine how much fun we would have had in the open sea.

We reached Juneau, our first stop, on the second full day of the cruise.  The day dawned gray and cloudy.  This was the day I was hoping to see a humpback whale somewhere other than on a televison or movie screen.  My hopes were fading pretty quickly as the morning progressed.  I was just hoping we would see an orca in this mess.

Juneau itself is an interesting place.  If you’ve ever wondered where hippies go when California gets too structured for them, I have at least one answer.  Juneau is an odd, but interesting mixture of outright tourist traps, tourist traps masquerading as historic places and eco-businesses owned by old hippies.  Our whale watching cruise company fell into the eco-business category.

Orca Enterprises may be a faux eco-business in some ways.  I mean how can you seriously call yourself eco-friendly when you operate a small fleet of diesel powered tour boats that some other eco-friendly activists believe harass marine mammals.  However, it is not a tourist trap.  They know what they are doing, and they do not make false promises.

The trip to the viewing area was aboard one of their tour boats running four diesel engines, probably supercharged from the sound of them, putting out way more than 1,000 horsepower.  Captain Larry, the head dude, looked every bit the part of an eccentric escapee from the lower forty-eight.

He was well over six feet tall, and Ichabod Crane thin.  His hands looked like they’d been through hundreds of bare knuckle brawls, or he’d done manual labor that would make that dirtiest jobs guy on television run crying back to his momma.  As laid back as he looked and as slow as he talked, he did not waste time.  As soon as we hit the open water, he fire-walled the throttles, and we were bouncing across increasingly rough seas for more than forty minutes.  Several of our fellow passengers lost interest in whale watching and seriously regretted the lunch they’d eaten earlier that day.

Luckily, the run out to the whale area was not all pounding waves and seasick bags. Juneau was experiencing what the locals call a “cloud failure” that afternoon.  We were experiencing partially sunny skies with little squalls drifting around. The resultwas the most spectacular array of rainbows and double rainbows you can imagine. Rainbows were on all sides and in some cases they were a complete arc.  Getting pictures of them while bouncing along at 35 miles per hour was difficult, but the viewing was great.

As we approached the mouth of the fiord Captain Larry had chosen for us today, all thoughts of pounding waves, rain and rainbows left our minds.  At any one time, we could see signs of as many as six whales across the horizon.  At this range sightings were limited to spouts of water coming from blow holes, but the viewing improved as we approached.  We started to see splashes as whales sounded and a few fins waving in the air.  The crew was quick to remind us they would probably not be as playful as when they were summering in Hawaii, but if we watched closely, we would see some reasonably close by.

Everyone was mesmerized by the spouting, and glimpses of the small dorsal fins or ridges on the backs of the humpbacks.  Then one sounded and slapped the water with his flukes.  It was like the cue for rest of the entertainers to join the show.  Within a few minutes whales were breaching out of the water just like you see on television.  They were still fairly far away, and I swear they could tell when you moved your camera or looked away.  That is the only time they would breach.  Most of us with cameras got some wonderful shots of water spraying up, obscuring the humpback that was teasing us.

Suddenly the party really got rolling. A humpback that had been swimming between the boat and some islands decided to head back out toward the rest of the pod.  He announced himself with a massive blow, dove down deep and rocketed into the air just off the port bow about 300 feet out.  I think I got the splash on that one as he came down.  He then worked his way past us, breaching at least three 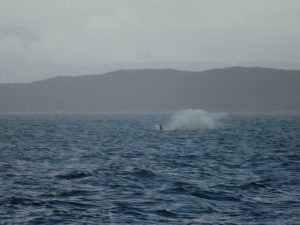 times, and always in a location that made certain we could see him, but not get his (or her) picture.

The crew estimated there as many as a dozen humpbacks around us.  They held us on station until the whales moved out to open water and then we headed back to port.  The ride in reminded me of bus trips home after your high school team won the big game.  Everyone was giddy and talking a mile a minute.  “Did you see how big he was?”  “What about the one that jumped right in front of us?”  “Man I wish my camera had been faster!”  “Can you believe how big he was?”

I have been to Maui at least eight times hoping to see humpback whales.  In every case, I missed the whales by anything from a few days to a few weeks.  I have seen dolphins, sharks, sea turtles and a few moray eels in their natural habitat.  Those sightings were nothing compared to this one.  Even a  football field away, a humpback whale launching itself into the air makes the rest of my sea life adventures pale by comparison.  I’d still like to make to Hawaii during the height of the humpback season, but if I do not I will not be terribly disappointed.

See "About."
View all posts by S. E. Jackson →
This entry was posted in Sea Life, Travel and tagged adventure, rainbows, tours, whales. Bookmark the permalink.

This site uses Akismet to reduce spam. Learn how your comment data is processed.